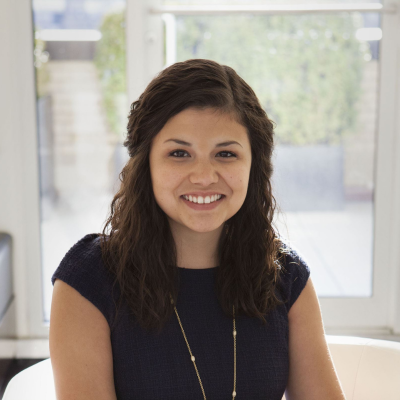 Since graduating from the School of Modern Languages, Tabatha Pilgrim Thompson, IAML-Spanish 2011, has applied her language and cultural skill to roles in community organizing, leadership development, political campaigns, and dialogue facilitation. As the director of partnerships and outreach at The Horizons Project, she cultivates meaningful relationships among social justice, bridge-building, and democracy practitioners working to advance a just, pluralistic, and peaceful democracy.

Her diverse experiences in intercultural affairs made her a clear standout for the 2022 Modern Languages Distinguished Alumni Award.

“I’m grateful to the School of Modern Languages for fostering my love of language and culture and cultivating a mindset of humility, curiosity, and determination so that I could continue using my language skills throughout my career,” Thompson said. “I valued the diversity of courses offered by the Modern Languages department—not only to learn my languages of study, but also experience how they were expressed in art, history, business, technology, and foreign policy.”

Growing up in a family with Filipino, German, and American heritage, Thompson always had an interest in different cultures and histories. She explored this interest further during her undergraduate studies by taking classes not only in her target language of Spanish, but also in French and Arabic. She traveled abroad for the first time with the Language for Business and Technology (LBAT)-Spain and organized an independent study abroad to Sciences Po to develop her French proficiency.

“I remember the feeling of being pushed outside my comfort zone on a daily basis as I sought to express myself with my classmates, my host family, new friends, and professors, as well as learn about two very different but interlinked cultures with their own sub-cultures and histories,” Thompson said. “I remember feeling so self-conscious and worried that I would never reach the proficiency I hoped to develop. Yet, with time, practice, determination, and support from my classmates, professors, and friends, by the end of the summer, my Spanish proficiency advanced significantly, as did my love for the language.”

She continues to foster this curiosity in her personal and professional career.

“My first step when I travel to a new country is to pick up a short history book and pocket language guide to develop a basis of understanding on which to build through interactions with local partners, other expatriate staff, and excursions to cultural and historic sites when time and security allows.”

Thompson recently served as the acting director for the Program on Nonviolent Action at the United States Institute of Peace. In her role, Thompson worked with grassroots activists and peacebuilders to develop practical knowledge and skills for how nonviolent action and peacebuilding approaches can be used together to mobilize communities, build power, and address the grievances that can drive violent conflict. She also helped donor organizations better understand how they can effectively support social movements and the power dynamics of external support. She has field experience in West and East Africa, Latin America, Tunisia, Afghanistan, and Ukraine.

Thompson holds a master’s in human rights, humanitarian policy, and conflict resolution from Columbia University’s School of International and Public Affairs and a Bachelor of Science’s in International Affairs and Modern Languages from the Georgia Institute of Technology. She is a member of Women of Color Advancing Peace and Security, Foreign Policy for America’s NextGen Initiative, and the Truman National Security Project.

Thompson was honored at the Distinguished Alumni Awards ceremony on April 7, 2022. The eighth annual celebration honored exceptional alumni from each of the six academic schools and three Reserve Officer Training Corps (ROTC) units in the Ivan Allen College of Liberal Arts. Selected by the school from which they earned their degree or their respective ROTC unit, alumni are recognized for their significant contributions to the College, Institute, and the public welfare.

Congratulations, Tabatha, on this well-deserved award!