CEO of Futurus, LLC, Annie Eaton, Highlights the Importance of Language Skills in her Career 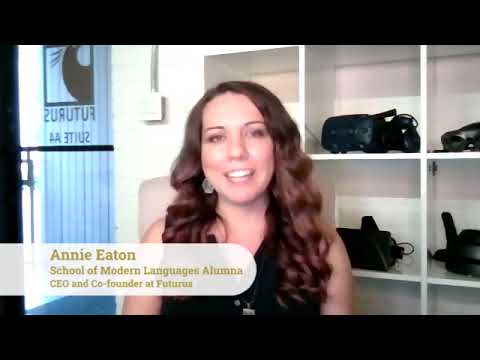 Language: A Gateway to Future Success

Read the full article below.

What’s the story behind Futurus?
“I was introduced to virtual reality back in 2013 by a former coworker who ended up becoming my co-founder of Futurus. I was immediately captured by the technology.

Back then, virtual reality was still a fairly primitive system. Now, the industry has grown in to a high-tech 360-degree world experience. We made the decision to start our own company and specialize in bringing virtual and augmented reality experiences to a wide variety of customers such as large corporations and nonprofits. Our primary drive comes from the desire to break the boundaries of technology and create an immersive experience that people won’t forget.”

What motivated you to study Spanish at the School of Modern Languages, and how does that tie into your work at Futurus?
“In high school, I wasn’t sure what I wanted to do in my career, but I knew I wanted to go to Georgia Tech. We have a long history of Tech graduates in my family. I wanted that STEM influence in my education while still pursuing a liberal arts degree.

During a high school trip to Spain, my first international excursion, I fell in love with the Spanish language. After taking Spanish for years in high school, I was able to use my skills in a real-world setting. Afterwards, I knew I wanted to further develop those foreign language skills in my career.

When I arrived at Georgia Tech, I learned about their International Affairs and Modern Languages degree (IAML) which I ended up pursuing and choosing Spanish as my primary language. Spanish has helped me in my previous roles as well as my current role at Futurus, where we have many international opportunities such as global tradeshows and events. I enjoy being able to give sales pitches in Spanish and communicate with stakeholders which allows me to share my love of technology to an entirely different audience. Without my Modern Languages degree, I would never be able to communicate effectively to those international audiences. I’m extremely grateful for that program and still use those skills daily as I run Futurus.”

What were you looking to get out of your Modern Languages degree, and how did the program propel you in your career?
“I knew I wanted to pursue the IAML degree, but I didn’t know how deep I was going to get into the Spanish language, spending more credits on Spanish courses than International Affair curriculum. The program was fantastic! I remember many of my professors; Dr David Shook and Dr. Vicki Galloway come to mind. Through that experience, I came to understand why language is vitally important in business and how it can open doors for you.

During my participation in the LBAT program, I feel like there was a turning point from taking classes to being completely immersed in the language. Throughout my six weeks in Mexico and four weeks in Spain, I was able to apply those foreign-language skills to practical use. I would highly encourage students to explore the LBAT program so that they can experience being completely immersed in the language. You’re surrounded by the culture – staying with host families and speaking Spanish continuously. It was a positive and powerful experience in independence for me in my college career.

Recently, Futurus was named a recipient of the Metro Atlanta Chamber’s Exports Grant, giving money to companies in and around the Atlanta area giving them the opportunity to expand and explore their international business. Without the Modern Languages program and my experiences there, I would not have found the drive to heighten my Spanish skills, making Futurus successful on that front.”

The School of Modern Languages’ core values are cross-cultural communications and global competencies. Can you speak to how you use those in leadership roles?
“Learning a foreign language significantly impacts how you use your own native language. Studying Spanish strengthened the way I think about English and translating language in a cross-cultural presentation setting. Those learned cross-cultural communications skills allow me to teach others about our emerging technology and share knowledge on a global scale. As a leader, knowing how to communicate effectively in multiple languages has also made me a better listener in my experiences with my employees and members of the community, bridging the gap in potential language barriers. I consider those leadership skills as important as learning the language itself. A strong basis in critical thinking and communications has helped me bring my company to what it is today.”

Are there any new initiatives at Futurus you want us to know about?
“Futurus recently did a project called “Call the Play,” a partnership with United Way of Greater Atlanta, which was displayed on a large scale at the Super Bowl LIII hosted in Atlanta (Mercedes Benz stadium). Our goal was to drive a positive message focused on anti-bullying to guests while participating in this virtual reality experience. By adapting their program ‘Character Playbook,’ we highlighted the importance of communication skills, social and emotional learning, and conflict resolution for our young audience, primarily in the middle schooler age range.”

What advice would you give to Georgia Tech students?
“If there are any students potentially looking to study a foreign language at Georgia Tech, I would tell them to go for it! I could not say more positive things about the School. I feel like as a student you must look at the full picture. Don’t just consider the languages you’re learning; consider the world that you’re opening yourself up to. Opportunities will present themselves when you have foreign language experience. See beyond what’s on the surface and take advantage of all of them opportunities you have as a student. In my experience I didn’t just learn Spanish. I learned leadership skills, communication skills, and cross-cultural skills that I use every single day in my role as CEO.”