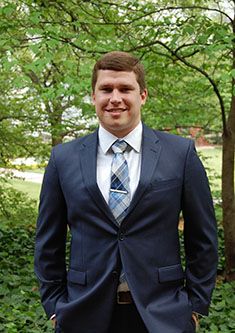 Parker A. Kemp graduated from Georgia Tech in December 2014 with a Bachelor of Science Degree in Mechanical Engineering as well as a Bachelor of Science Degree in Applied Languages and Intercultural Studies with a specialization in German.  Parker began studying German at the age of 13 due to his passion for German cars. In pursuit of this interest, he was granted the Automotive Hall of Fame Scholarship and chose to attend Georgia Tech to improve his German language skills and gain a background in Mechanical Engineering with the ultimate goal of one day working for a German automotive company. While attending Georgia Tech, Parker participated in the German LBAT study abroad program. This was an outstanding and valuable opportunity to gain an appreciation for the intricacies of the German culture and various business environments, as well as a chance for full immersion within the language. Parker then spent one year as an intern at Porsche Cars North America’s Atlanta headquarters in the Sales Operations department.  Upon graduation from Georgia Tech, he accepted a position as the Sales Program Development Specialist at Mercedes-Benz’ U.S. headquarters in Atlanta.  Today, Parker frequently utilizes the German language and cultural knowledge gained at Georgia Tech in interactions with German and American executives regarding the market positioning of Mercedes-Benz in the United States.