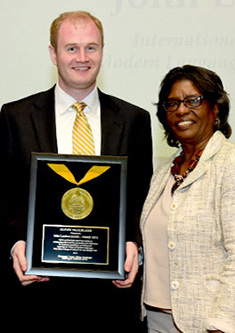 Soon after graduation from Georgia Tech, Lambert left for Berlin to intern with the Political-Military Affairs section of the U.S. Embassy for the Department of State. His knowledge of German culture, society, and history were essential to perform his duties.

He used his German language skills to follow the local media, represent the embassy at conferences hosted by the German Ministry of Foreign Affairs and think-tanks, and to participate in discussions with German diplomats. Subsequently, Lambert pursued graduate studies at the BMW Center for German and European Studies at Georgetown University.

He is now an operations analyst with TechOp Solutions in Arlington, Virginia, as part of a contract with the Department of Homeland Security’s National Operations Center. He is primarily responsible for assessing broadcast media (TV, radio, Internet, Wire Service, etc.) and preparing summaries of articles of interest to enhance situational awareness for senior DHS decision makers. His familiarity with the German media — particularly the reputations of various outlets — has been crucial. Lambert judges that his German skills were critical to being hired as an intern for the U.S. Embassy in Berlin as well as his admission to Georgetown for his master’s degree.